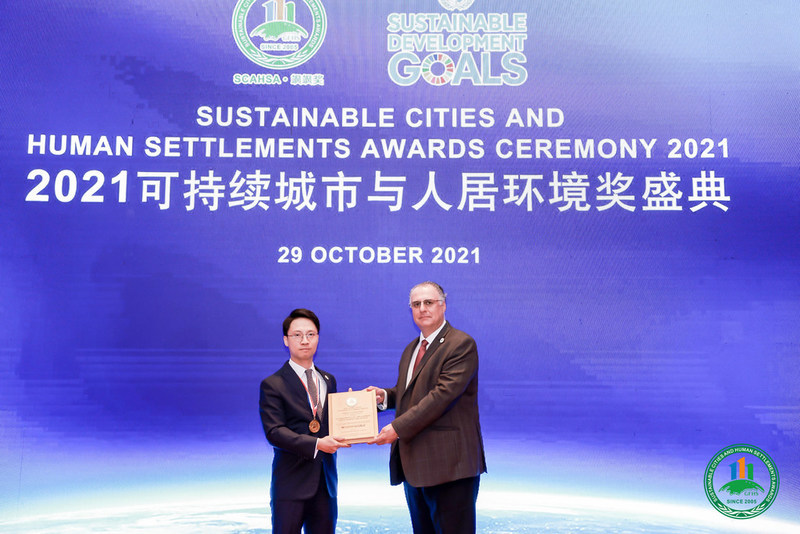 GFHS 2021 aims to unite cities worldwide in the effort to tackle climate change and adopt sustainable development. To date, 25 authoritative organizations are already on board, including 10 major UN agencies, among them the World Meteorological Organization (WMO), the United Nations Conference on Trade and Development (UNCTAD), the United Nations Development Programme (UNDP) and the United Nations Office for Disaster Risk Reduction (UNDRR). The theme of this year's event is "Accelerate Green Transformation and Innovation Towards Healthy, Resilient and Carbon-neutral Cities".

Country Garden's Forest City has been lauded by both judges and guests for its low-carbon green development concept. The project, located in the Iskandar Malaysia Special Economic Zone, Johor, has facilitated the growth of its urban economy through the planning and ongoing establishment of eight key industries based on the concept, with the aim of creating an environmentally responsible, dynamic and multicultural city that can serve as a model for city-industry integration.

"Forest City has effectively reduced the urban heat island effect by optimizing the efficiency of CO2 fixation in plants while its urban planning and green building design alongside the city-industry integration concept have come together to facilitate the creation of a green and low-carbon city," commented Arab Hoballah,Senior Sustainability Expert, former Chief, Sustainable Consumption and Production, UNEP. "In addition, the project has delivered outstanding performance in terms of protecting the coastal ecological environment, building an inclusive culture and applying smart city technologies."

Forest City has been applying the concept of low-carbon green development to all stages of its urban planning, development and operations since its inception. By adopting a multi-dimensional greening system across applications from the ground to the roof, project directors and engineers succeeded in including a green area of 2.71 million square meters horizontally and some 256,000 linear meters vertically that helped optimize the efficiency of CO2 fixation in plants while reducing the urban heat island effect and the energy consumption of temperature control systems.

Besides, as part of the effort to improve urban resilience and promote environmentally responsible travel, the project provides the local community with smart and convenient ways of mobility through the use of intelligent applications while promoting walking and cycling as forms of travel by building a consistent and green support infrastructure for these healthier modes of transport. In addition, the city-industry integration-based development plan will result in a lower-carbon city by reducing the distance of and the time needed for daily commutes.

Forest City, an advocate of the Sponge City concept, has built five sewage treatment stations with a combined capacity of 170,400 population equivalent. The advanced system for ecological treatment of wastewater coupled with the treatment system for constructed wetlands delivers a higher quality of water than Malaysia's normal standard CLASSⅡB. Moreover, an independent reclaimed water recycling system has been created for use in roof, vertical and outdoor greening as well as irrigation and the flushing of public toilets.

To date, Forest City has invested more than RM140 million in the aggregate in environmental protection, including the establishment of a seagrass reserve and the implementation of protection and breeding measures. In a move to foster neighboring communities and support regional development, the project has also invested over RM53 million in building communities and villages in the vicinity as well as in funding local schools. Five years in the making, Forest City is taking shape after gradually meeting its phased ecological development goal. Going forward, to better respond to the global goal of carbon neutrality, Forest City plans to continue its commitment to achieving harmony between urban development and protection of the ecological environment.