NEW YORK, Nov. 16, 2017 /PRNewswire/ -- On 31 October (US Eastern Standard Time), the 2017 Sustainable Cities and Human Settlements Award (SCAHSA) ceremony was held in New York. Country Garden Forest City won the Global Model of Green Building Industrial Park award for its industrial park serving the construction industry. This is the second year in a row that Forest City has garnered the honour. 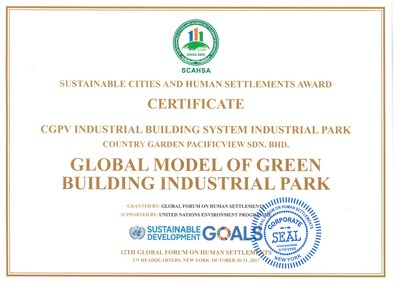 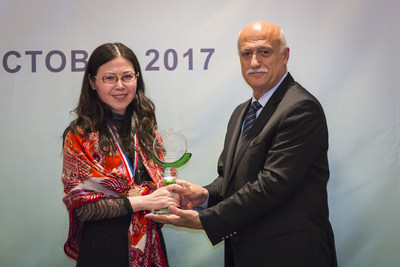 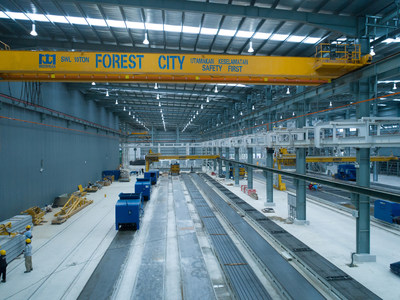 The Global Forum on Human Settlements (GFHS) is a non-profit organization, with Special Consultative Status within the United Nations Economic and Social Council (ECOSOC). The organization is committed to sustainable cities and human settlements for all. The SCAHSA award established by GFHS is a trend setter for urban construction everywhere that respects sustainable development. Forest City, China's Wuyi County and Indonesia's Surabaya City were among the winning projects submitted from 23 countries and regions worldwide. Forest City won the SCAHSA Global Human Settlements Award on Planning and Design at the 11th Global Forum on Human Settlements (GFHS - XI).

Forest City has taken the traditional construction industry to the next level, and, as a result, has received recognition from many professionals including Mara Angelica Murillo Correa, senior programme officer for intergovernmental affairs at the United Nations Environmental Programme (UNEP)'s New York Office, Dr. Arab Hoballah, member of the SCAHSA jury and former Chief of the Sustainable Lifestyles, Cities and Industry Branch at UNEP, as well as Lu Haifeng, Secretary General of GFHS.

Forest City's industrial park, with a gross floor area spanning some 1.6 million square meters, is conveniently located in the northwest section of Forest City, adjacent to the Port of Tanjung Pelepas (PTP) and approximately 10 km from Forest City's Island One.

The park is on track to evolve into a leading comprehensive and modern manufacturing facility for construction products with reach across Asia and even globally by integrating the entire industry chain, including construction engineering, PC prefabrication, logistics and transportation, parts processing, assembly and construction as well as science-based research and development. The first phase of the modern PC prefabrication plant has already been completed and now ranks first across Asia in terms of single-building capacity. The second phase of the park is now under construction, including two specialty plants, each of which is approximately the same size as the facilities completed in the first phase. After completion of the two plants, the park is expected to become the world's largest industrial production facility for construction products in terms of overall capacity.

In addition, Forest City will include several support facilities and a powerful water transportation system, all of which are expected to be put into operation in 2019, with the aim of creating a truly industrialized manufacturing base for the construction industry over the next three to five years.

Forest City has received multiple international awards over the past few years. Citing a few examples, in 2016, the project was honoured with the BSLA Merit Award, one of the most prestigious design awards in the US. The project's representative building, the International Clubhouse, was awarded the LEED-CS Gold Pre-Certification by the U.S. Green Building Council (USGBC). Forest City also received the 2016 Frost & Sullivan Asia-Pacific New Product Innovation Leadership in Property Development Industry Award.